Ruby is one of the most sought-after gemstones in the world, after diamond. In fact, it is fast gaining popularity because of its sturdiness, beauty, and durability. Moreover, it is considered to be rarer than diamond. Natural ruby is the red variety of the mineral corundum, which is also the origin of Sapphire, a different gemstone.

Although both Ruby and Sapphire belong to the same mineral family, they are completely different because of their color. Sapphires are available in colors ranging from yellow, green, purple, pink, except red. In fact, one could very well say that red Sapphire could be a Ruby.

The color of Ruby ranges anywhere between red to reddish-brown; however, the most popular and in-demand color is the blood redone with a bluish hue. These types of Rubies are called Burmese Ruby or Burma Ruby or Pigeon Blood Ruby. It should be noted here that Burmese Rubies rarely exceed several carats.

Even if they are found in larger proportions, they are mostly flawless and worth millions of dollars. Currently, Thailand is the largest producer of Rubies, but they are less desirable because of their color which has a brownish tinge to it. Rubies can be heat-treated for color and quality correction. The heat treatment can also eliminate the internal flaws that Rubies have.

However, given the variety and shades of the gemstone, it is worth explaining which variety of Ruby belongs where. So, here are some different varieties of Rubies:

Burmese Ruby: Considered to be of top quality, these Rubies are flawless and have a unique shape to them. Burmese Ruby is deep red in color due to the presence of chromium in it. They are generally found in Myanmar. All rubies have blemishes and you have to look for them when you have to identify the real from the fake.

Thai Rubies: They are originated from the southeast of Bangkok. They are considered to be the second-best after Burmese Rubies. They are darker in color because of Iron and Chromium.

Ruby gemstone from Tanzania:These Rubies are less expensive than Burmese or Thai Rubies. There is one peculiarity of Tanzanian Rubies. Their color intensity reduces when the size of the Ruby increases. Therefore, smaller varieties are considered to be more precise.

Rubies from Madagascar: The two regions where they are mined mostly in Madagascar are Andilamena and Vatomandry.  These rubies are found are red, orange and naturally red in color.

Rubies from Afghanistan: They are considered to be of superior quality, which is not found elsewhere in the world. The color of the original ruby stone found in this area ranges from light red to dark red.

Rubies from Africa: Available in purplish to dark red colors, African rubies have varieties of shapes and sizes. The best color of these rubies is the fine dark red color.

The Ruby gemstone is often mixed-cut, which includes brilliant cut-crowns and step-cut pavilions. However, the most common shapes are ovals and cushions. Other cuts include round, triangular, emerald-cut, pear and marquise cut. It should be mentioned that these shapes are not found in larger sizes. It must also be mentioned that Rubies above one carat are rare to be found. Therefore, the prices increase greatly with the sizes.

It should be mentioned here that Rubies that are typically cut en cabochon, display asterism; Whereas, rubies with rutile inclusions exhibit star silky luster. Transparent rubies exhibit a vitreous luster. Rubies, as we have already mentioned, are exposed to heat treatments to enhance color. Some of the other enhancements include fracture filling with lead glass. These are conducted to make gemstones, jewelry fit for use.

It is a matter of choice whether you wish to buy the original gemstone with its flaws or a heat-treated one, both varieties being available to all the jewelers. If the gemstone is heat-treated, oiled or dyed, the jewelers will let you know that in advance.

What Is Kanakapushyaragam Gemstone? Important Guidelines 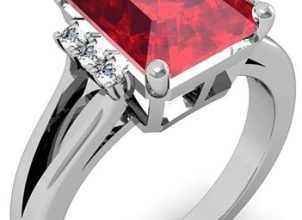 What Are Astrological Benefits Of Ruby Gemstone?